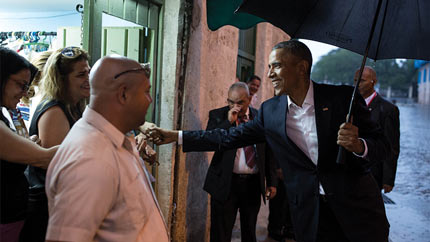 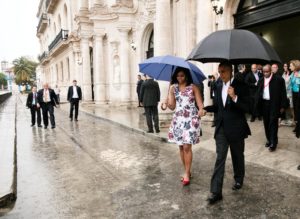 When it comes to normalizing relations with Cuba, it’s incredible that we’re even talking about it at all. This very day, just 54 years ago, marked the beginning of perhaps the most dangerous moment in human history.

On October 14, 1962, an American U-2 plane flying high over Cuba photographed the construction of offensive nuclear missile sites on the island — sites intended to house missiles capable of striking Washington, D.C and major cities throughout the hemisphere.

Recognizing this reality, President Obama came into office determined to re-examine our Cuba policy. To begin, we relaxed restrictions on remittances and allowed Cuban Americans to travel home to visit their families. We stepped up dialogues with the Cuban-American community. Eventually, we reached out — cautiously and deliberately — to the Cuban government. It took months of closely-held negotiations, facilitated by the Vatican and by Canada. It took, if you can believe it, the transcontinental artificial insemination of the wife of an imprisoned Cuban spy. You really can’t make this up.

But, on December 17, 2014, half a century after that white-knuckled nuclear standoff, President Obama and President Castro announced that the United States and Cuba would begin normalizing relations. It was quite a way to go into the December holidays. And it will be, I think, one of the enduring achievements of the Obama administration.

I know because I’ve seen it with my own eyes. In March, I had the privilege of joining President Obama as he became the first sitting American president to visit Cuba in 90 years. I’ve been on a lot of these foreign trips, but this was one something else. There was a good vibe to the place. In addition to President Obama’s meetings with President Castro, we also met with entrepreneurs and civil society activists. And we capped it off watching the Tampa Bay Rays play an exhibition game against the Cuban national team. President Obama entered the stadium to thunderous applause. I sat with President Obama, President Castro, Jackie Robinson’s widow, Rachel Robinson, and Derek Jeter as a Cuban choir sang the American national anthem. It was surreal, to say the least.

Because, after years of bad blood and bad faith, the American flag flies proudly over our reopened embassy in Cuba. Last month, President Obama nominated an outstanding public servant, Jeff DeLaurentis, to be the first U.S. ambassador to Cuba in more than 50 years. Jeff has skillfully represented our interests in Cuba for years, including as Chief of Mission in Havana since August of 2014. The best way to advocate for our values and interests is to have an ambassador who can travel the country, take our case to Cubans, and continue to work for change. Stronger diplomatic ties will enable constructive engagement on areas where we differ.

And today, I’m pleased to announce that the President is issuing a new directive that will institutionalize this progress and guide the United States’ policy towards Cuba going forward. This directive outlines the future we’d like to see — a future of greater engagement, greater cooperation, and greater opportunity for Americans and for Cubans. It assesses the current strategic landscape and our key policy objectives within that context. And, it directs a wide range of agencies — from the Department of Treasury to the Department of Health and Human Services — to expand their engagement with Cuban counterparts to help achieve those objectives.

“Today, I approved a Presidential Policy Directive that takes another major step forward in our efforts to normalize relations with Cuba. This Directive takes a comprehensive and whole-of-government approach to promote engagement with the Cuban government and people, and make our opening to Cuba irreversible.” — President Obama

Perhaps most importantly, this directive is being made public. We used to have secret plans for Cuba. Now, our policy is out in the open — and online — for everyone to read. No more conspiracy theories for critics on the left or right to spin. What you see is what you get. This unclassified directive supersedes and replaces our prior Cuba policy and any previous classified documents laying out that policy. In Cuba, there is a saying,“Es el mismo perro con diferente collar.” It means, “It’s the same dog with a different collar.” Well,esto es un perro diferente — this is a different dog. This is real change.

Today, the Departments of Treasury and Commerce are also announcing further regulatory changes. Among these changes, we’re expanding the grants that can be made to foundations to help Cuba develop.

We’re authorizing clinical and non-clinical medical trials in the United States. And, saving the best for last, we are lifting the cap on imports of Cuban alcohol and tobacco, so long as those imports are for personal use. I thought that one would wake some folks up. You can literally break out the cigars to celebrate.

With these changes, we’ve done about as much as we can through regulatory action without a lifting of the embargo.

Congress should listen to the majority of Americans who oppose the embargo — including nearly two-thirds of Miami’s Cuban-American community: End this outdated burden on the Cuban people, end the restriction on Americans who want to do business with them, and help us secure a better future for both countries through the exchange of resources, goods, and ideas.

While much work remains to be done, it’s also a new day as we seek to promote respect for human rights and values throughout Cuba. We believe that every citizen should be able to choose his or her leaders freely and fairly. We believe in the right of a lady in white to walk through the streets in silent protest, just as Americans are free to speak out against bias in our criminal justice system. Freedom of speech and assembly, freedom of religion — these aren’t just American values, they are universal values.

As we do in countries around the world, we will continue to advocate in Cuba for the basic human rights that are recognized by virtually every nation in our hemisphere, and to stand by Cubans who peacefully demand these rights. The Cuban-American story is a painful one as well. For too many decades, families were cut off from one another. I was in Miami earlier this year. I met a number of young people, some of whom experienced this difficult history of loss and longing. As President Obama said in Havana, “the reconciliation of the Cuban people — the children and grandchildren of revolution and the children and grandchildren of exile — that is fundamental to Cuba’s future.”

Today, those children and grandchildren can travel on one of 110 new direct flights from the United States to Cuba. They cansend direct mail for the first time in more than 50 years. Carnival cruise liners are docking in Cuban ports.

We’re encouraging that reconciliation when American chefs like Jose Andres meet their Cuban counterparts, when Shaq plays basketball with young Cubans, or when Misty Copeland, the American Ballet Theatre’s first Principal Dancer of color, travels to Cuba next month to teach dance classes and clinics.

A week ago, the American men’s soccer team played a friendly exhibition game with Cuba. This week, eight Cubans arrived in the United States as part of the inaugural class of 250 Young Leaders of the Americas Initiative Fellows, who are making our hemisphere more interconnected, prosperous, and secure. That’s in addition to the ten Cuban entrepreneurs who joined President Obama at this year’s Global Entrepreneurship Summit. As one Cuban-American woman says, “This is not merely symbolic. As a young Cuban American, I have witnessed the real possibilities that have opened, through good will, to improve relations between our countries, and to improve the lives of Cuban citizens.” Ultimately, that is what normalization is all about — improving relations and improving lives.

Later today, like most days, I’ll be in the Situation Room — the same place where President Kennedy and his Executive Committee held their breath for those tense days in October. In fact, we now call part of the Sit Room the JFK conference room.

Who would have thought that we could one day overcome the weight of history and forge a more secure and prosperous region?

As we go forward, I’m reminded of the words of the Cuban-American poet Richard Blanco — words he recited at President Obama’s second inauguration, when he spoke of “hope — a new constellation… waiting for us to map it… waiting for us to name it — together.”

That is the promise of this transformative approach to our neighbor. This is the world Cubans and Americans can reshape together. And, if we continue on this path, I’m confident that the future with Cuba and in our hemisphere is bright.

The First Scheduled Flight from the U.S. Arrives in Cuba
Today, for the first time in over 50 years, a scheduled flight arrived in Cuba from the United States. The historic…www.whitehouse.gov
Day One in Photos: The First U.S. President in Cuba in 88 Years
Yesterday, President Obama made history. For the first time ever, Air Force One touched down in Havana, Cuba.medium.com
Asked and Answered: Sending Direct Mail to Cuba for the First Time in 50 Years
An American president has not traveled to Cuba in almost 90 years. But on March 20, President Obama will become the…medium.com