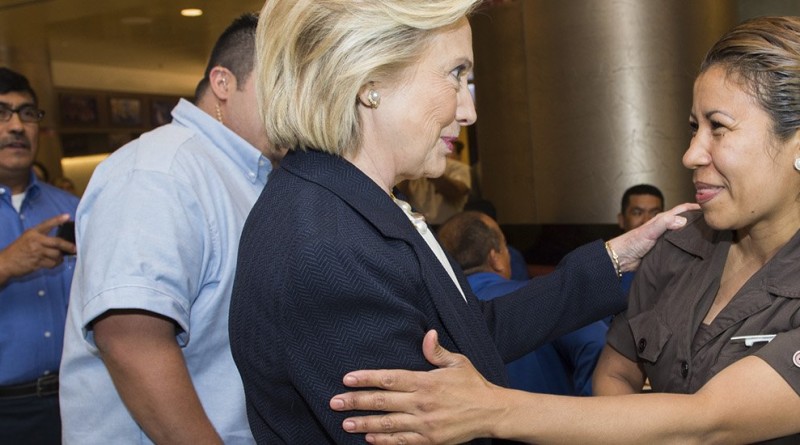 Hillary believes the defining economic challenge of our time is raising incomes for hardworking Americans.

Too many families are working harder and harder, but still not getting ahead. Our country is standing again, but we’re not yet running the way we should be. From her first day in office to the last, Hillary Clinton will fight for you and for more take-home pay so you can get ahead and stay ahead.

Hillary understands that in order to raise incomes, we need strong growth, fair growth, and long-term growth. And she has a plan to get us there.

Hillary will invest in infrastructure, clean energy, and scientific and medical research to create jobs and strengthen our economy. And she’ll provide tax relief to working families and small businesses. That’s how we’ll move toward a full employment economy that creates jobs, pushes businesses to compete over workers, and raises incomes.

Provide tax relief for families. Hillary will cut taxes for hard-working families to increase their take-home pay as they face rising costs from child care, health care, and sending their kids to college. She is calling for extending a tax cut of up to $2,500 per student to help deal with college costs as part of her New College Compact, and for cutting taxes for businesses that share profits with their employees.

Create a New College Compact. Hillary’s New College Compact will invest $350 billion so that students do not have to borrow to pay tuition at a public college in their state. Her plan will also significantly cut interest rates on student loans and enable an estimated 25 million Americans with student debt to refinance at today’s lower rates, saving the typical borrower $2,000 over the life of their loans.

Lift up participation in the workforce—especially for women. For too long, issues like equal pay, paid leave, and affordable child care have been put off to the side as “women’s issues.” Hillary believes they are crucial to our competitiveness and growth—and to lifting incomes for working families.

Inequality is a drag on our economy, and to get incomes rising again, we need to renew our country’s basic bargain. With near-record corporate profits and stagnant wages, the deck is stacked against working Americans. If you work hard, you deserve to get ahead and stay ahead.

Ensure more workers share in near-record corporate profits. Corporate profits are near record highs—but workers have not shared through rising wages. Profit sharing is linked to higher pay, benefits, and productivity. That’s why Hillary’s plancreates a 15 percent tax credit for companies that share profits with workers on top of wages and pay increases.

Raising the minimum wage and strengthening overtime rules. Hillary believes we are long overdue in raising the minimum wage. She has supported raising the federal minimum wage to $12, and believes that we should go further than the federal minimum through state and local efforts, and workers organizing and bargaining for higher wages, such as the Fight for 15 and recent efforts in Los Angeles and New York to raise their minimum wage to $15. She also supports the Obama administration’s expansion of overtime rules to millions more workers.

Reform our tax code so the wealthiest pay their fair share. Hillary supports ending the “carried interest” loophole, enacting the “Buffett Rule” that ensures no millionaire pays a lower effective tax rate than their secretary, and closing tax loopholesand expenditures that benefit the wealthiest taxpayers to pay for her plan to make college affordable and refinance student debt.

Expand early learning. Hillary’s proposal would work to ensure that every 4-year-old in America has access to high-quality preschool in the next 10 years.

It’s time to push back against the forces of “quarterly capitalism” and boom and bust cycles on Wall Street.

Put an end to “quarterly capitalism.” We need an economy where companies plan for the long run and invest in their workers through increased wages and better training—leading to higher productivity, better service, and larger profits. Hillary will revamp the capital gains tax to reward farsighted investments that create jobs. She’ll address the rising influence of the kinds of so-called “activist” shareholders that focus on short-term profits at the expense of long-term growth, and she’ll reform executive compensation to better align the interests of executives with long-term value.

Impose accountability on Wall Street. Nowhere will the shift from short-term to long-term thinking be more important than on Wall Street. Hillary will defend the Wall Street reforms put in place after the financial crisis—and she’ll go further. She’ll tackle dangerous risks in the financial sector, and she’ll appoint and empower tough, independent regulators and prosecute individuals and firms when they commit fraud or other criminal wrong-doing.

Stand with Hillary if you agree:
It’s time to help families get ahead and stay ahead.